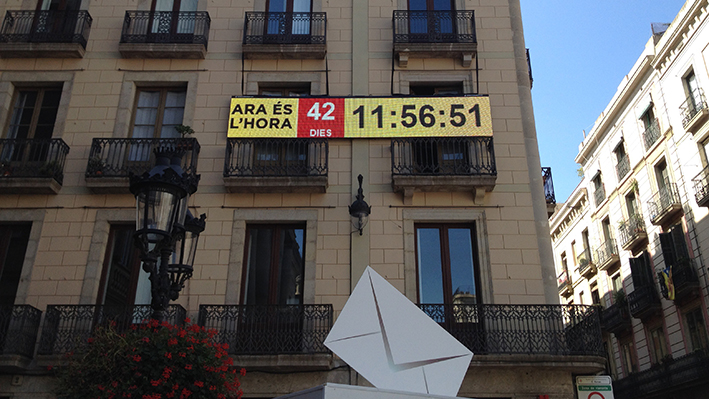 Stereo Rent has been the company hired to install the 9-N countdown timer in the Plaça Sant Jaume (Barcelona).

On this occasion, Stereo Rent has set up 24 panels of 16mm resolution LED curtain.

The countdown timer was inaugurated by ANC and Òmnium Cultural at the same moment of the consultation decree calling signature by the Pri»Societat Civil Catalana held a demonstration on the 12th of October in Plaça de Catalunya of Barcelona on the occasion the National Day of Spain. For this occasion, Stereo Rent launched a great audiovisual installation composed of LEDs screens, plasma screens, line array audio systems, racks for press, live broadcasting, and lighting. The stage featured a large 10mm resolution LEDs screens of 9 x 5 metres reinforced by three other screens of 6,4 x 3,84 metres located at the three corners of the square to attract attendees. A line array sound system was also installed in each screen. The content of the LED screens were videos supplied by the organization and the images of the live broadcasting. Three cameras were placed in the square and a fourth camera captures overhead planes from the roof of a building in the square ans the imaged were transmitted via a radio link.»me Minister in the Palau de la Generalitat.